Carmen Palmieri founded our company in 1943 in his basement with no money and a strong desire to work. The first aluminum castings he made were tiny Italian cookie irons. After filling an order for sinker molds requested by one of his customers, he decided to create an entire line of molds, branded with his name. Because it was difficult to sell products under a very Italian sounding name at that time, he Americanized it to be C. Palmer Manufacturing, Inc.

From a basement to modern manufacturing plant

As the business continued to grow, the product line expanded, too. By the late fifties, his basement was too small for the operations, so Carmen and his first son, John, built the company's first plant. John was fresh out of the Navy and anxious to help his father. He had worked in electronics during his time in the Navy, and he had several new, innovative ideas for products, as well as plans for how they could automate the production. The company introduced the first electric Pizzelle Iron and the Palmer Sandwich Toaster.

Sales were booming, and it did not take long to outgrow the existing plant. In 1964 they purchased land and built a new plant with more than enough room, or so they thought. John designed and installed a fully automated sand casting system. Many companies were quite impressed with it, and one national electronics manufacturer sent their engineers to the plant to see how it was set up. They were amazed that such a small company could have so much automation with limited resources, and they asked to use some of the ideas that John had implemented. He agreed.

C. Palmer Manufacturing bought their first aluminum die cast machine in 1976, which boosted the quality of the products and reduced the need for secondary operations. By the end of the 70s, a Tool and Die department was added which allowed us to grow substantially. We could now build our customers' dies at a minimal charge, saving them thousands of dollars and providing us assurance that the dies were properly constructed.

Transition to the next generation

In 1980 it was necessary to expand with an addition and again two years later. John's first son, Philip, joined the company in 1984 and introduced computerization to the production process. Sand casting was phased out and converted to die castings.

In the late 90s, the company was still growing rapidly, and two of our largest customers projected increases of 40% to 100% in their purchases for the following season. Again, it necessary to expand, and C. Palmer Manufacturing opened their die casting division, C. Palmer Die-Casting, Inc. in Oakland, Maryland. Darcy, John's daughter and Carmen's granddaughter started working at C. Palmer Mfg in 1996 and took over running the company when John retired in 2003. Soon after they began offering their products online.

On Friday, March 11, 2011 C. Palmer Mfg. lost their founder. Carmen Palmieri, 96, of West Newton. He died in Excela Health Westmoreland Hospital, Greensburg. He was born on June 12, 1914 in Lettopalena, Italy, and his parents were John and Assunta (Tranchni) Palmieri.

It was a sad day for all of C. Palmer Mfg. His friends and family still miss his smile and his ability to make you laugh with his jokes. He was a hard worker and dedicated to his business. The employees miss having him around, too, giving advice and always providing a helping hand.

Despite the loss, the company continued to thrive and grow throughout the 2010s. We passed our 75 year anniversary in 2018, designed a new pizzelle iron, and we are excited for what the future has in store for C. Palmer Mfg.! 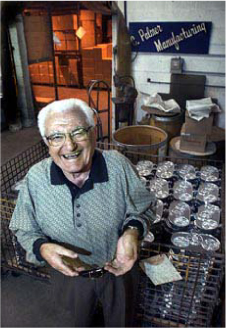